I have received a lot of feedback after my post “Has anyone ever thought of a new type of payment system?”. Thanks to all of those who tried to analyse and set out their vision. Special thanks to those who doubted my competence and brought out their own understanding of the processes and entered into a dispute.

I have received a lot of feedback after my post “Has anyone ever thought of a new type of payment system?”. Thanks to all of those who tried to analyse and set out their vision. Special thanks to those who doubted my competence and brought out their own understanding of the processes and entered into a dispute. And very special thanks to those few who used only accusations in scam and profanity as arguments – they made me understand that it is impossible to explain to everyone, no matter how hard you try. Nevertheless, thanks to the first two categories It became clear to me that the information presented in the article is incomplete and needs to be described in more detail, but of course, only to the first two categories.

The chain of relationships listed below has been greatly simplified to facilitate understanding. Consciously omitted many things, the description of which would take a huge amount of space.

Majority who oppose technology do not look up to the future and, most importantly, have no idea about the past. Technologies are similar to science, innovation, they can frighten with their ideas and cause rejection in the beginning. After adoption, adherents become ardent followers and hardly recognise something new that goes against already established convictions. Bethink of Christianity – some tried to eradicate it, destroy it, burn Christians on fires, feed them to lions, killed unarmed people in gladiatorial battles. Later, Christianity itself has struggled with dissent – Galileo, Copernicus, Bruno. Examples that are closer to us in time are cars with internal combustion engines, telephone, radio, airplanes … all these inventions met resistance at the stage of their appearance and caused a storm of ridicule and aversion and misunderstanding of the “use cases”. Not such a distant example with the advent of the Internet, when the web pages were so simple and uninformative that the majority of the population of the Earth simply did not take it seriously and, moreover, did not see its use. There are many such examples. And even the temporary absence of the “use cases” does not indicate the uselessness or irrelevance of the technology, it indicates that the world is not ready yet to apply the technology at the moment due to habits, beliefs, interests, and sometimes, incompetence. The topic of the blockchain and cryptocurrency in particular is susceptible to reproaches in the absence of its practical use, which is understandable due to the youth of the technology and its initial stage of formation and development. In addition, in some cases, the line should be drawn between the cryptocurrency and the blockchain technology itself, since the majority of people do not see the technology itself, but only its derivative in the form of a mass of coins, most of which are dummies and really have no application. But, nevertheless, even at the present stage of development of the blockchain technology, the talk about the lack of “use cases” indicates not owning information, well, or not wanting to see the obvious – merchants, Jaguar, Facebook…

All this applies to today’s financial sector conditions. And that is obvious, because the technology of making payment via plastic cards comes from the 1950s. Several generations of people grew up on the existing system and have a long-established habit of using it. Several generations of banks earn huge amounts of money on commissions that customers pay. Several generations of companies providing these payments have changed leadership. Some have gone, and those who remain hold such strong positions and their profits are so huge that they have no reason to rejoice in large numbers for the technology – after all, they can shake their incomes, and the scale of these companies does not allow them to respond quickly to changing time. But even with this in mind, the interest of these companies in technology is obvious. Such pillars like VISA, MC, WU, Barklays, BBVA and many others either look for ways to introduce the blockchain technology or already use it. But, nevertheless, attempts to introduce the technology are still being applied to the existing payment system, credit, and financial relations. Now, I will introduce my own arguments and briefly describe essentially new approach to making payments.

Part One – “What are the existing payment systems and how do they work.”

In today’s payment system relations, there are six subjects:

We can introduce scheme: 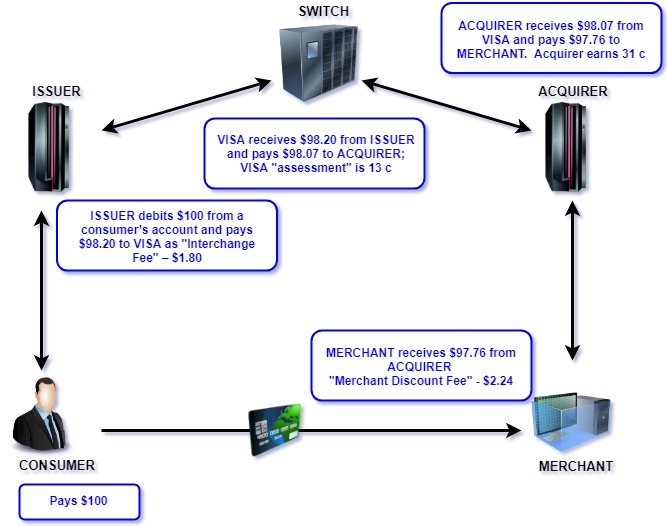 Switch is an intermediary between all the parties of the entire system and receives a commission for all transactions. Who can even imagine the infrastructure setting expenses to operate the processes of settlement analysis, comply with the requirements of KYC / AML, match modern safety requirementsfor the launching of data centers around the world. Of course, commission is the source to operate.For ease of explanation, we imagine that the Switch is the processing center.

Conceptually, costs can be divided into Organizational and Technical

And such (all of the above) costs must be borne constantly, if we are talking about expanding your presence. Switch (processing centers) can cover these costs only with a part of the commission for the implementation of monetary transactions, which is borne by the other participants in payment relations.Since the recipient of the client’s money is ultimately the merchant (seller / trader), it is logical that the entire amount of the commission is charged to him. This commission is called Interchange Fee (hereinafter – IF), it can be from 0.7% to 5% depending on the riskiness of operations. For example, an ordinary store, on average, pays 1.5% of IF, while, for example, an online store can pay 5%.It is noteworthy that for the client this commission is not visible and in 90% of cases he does not even know about it. Such a commission is included in the price of the goods. That is, by selling you a product for $ 100, the Merchant will receive (if he pays IF = 2.24%) $ 97.76.
The Switch distributes these $ 2.24 between the participants as follows:

So we pulled how the current payment system functions. Now, in detail about how this can function using blockchain technology.

Part 2 – “New payment system and how it works.”

One of the main significant achievements of blockchain technology is excluding of intermediaries. In the field of finance, this gives special advantages — cost savings.

A new type of payment systems based on blockchain can successfully use this advantage. Naturally, there are necessary assumptions for the use of this technology in the financial sphere:

Just as in the situation above with our American customer buying coffee in Australia: the same American and Australian banks, but they are in the same blockchain. It is convenient to send just cryptocurrency, of course, but the question immediately arises – “Why does the Merchant need it and what will it do with it? How will he solve the issue of currency fluctuations? ”Immediately make a reservation that I will not describe the technology here thoroughly, since this is a commercial secret, but briefly, I will describe the principle of operation.

Again, for ease of explanation, I omit some points that accompany the clearing process.

The scheme of the work of the new payment system can be represented as follows: 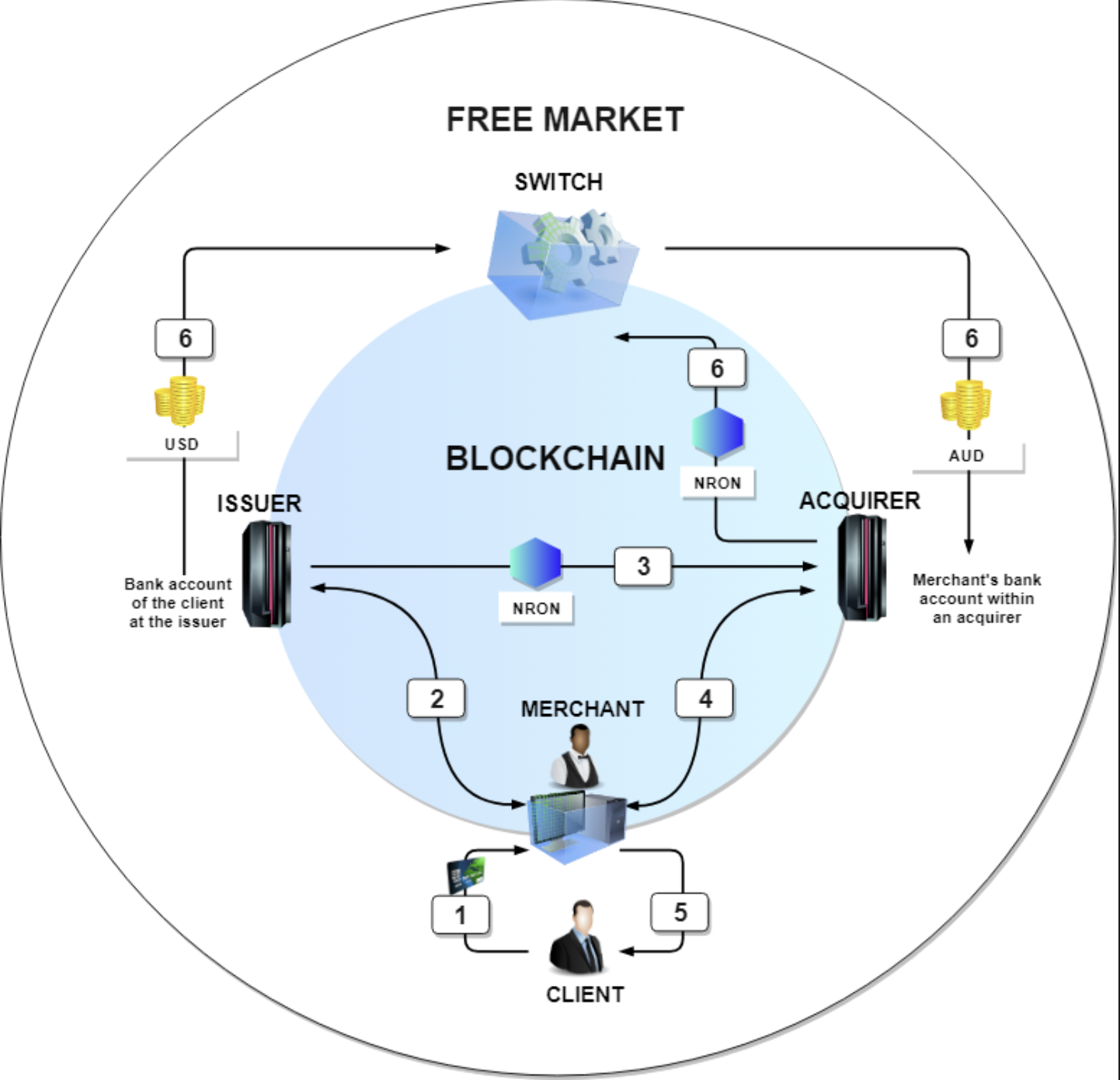 What is the advantage?

The savings in the process are obvious! The merchant receives 65.18% more money on his account. Bank-Acquirer receives almost as much as in the scheme with traditional processing. The Bank-Issuer receives less remuneration, but under a scheme with decentralized processing, it bears much less expenses on security of payments, payment verification, customer verification, respectively, personnel costs, which always constitute the bulk of costs, decrease.

In addition to the above economic factors, a new type of payment system has another, perhaps one of the most important advantages compared to traditional PS – to provide an infrastructure for the issuing of plastic cards for issuing banks is much cheaper than traditional PS.

Of course, to implement the payment relations described above, it is necessary to do a great deal of work, not only on the IT part, but also on technical and legal issues, to spend tremendous efforts on marketing and explaining the processes of the participants in the relationship. But impossible is nothing. In any case, the blockchain technology gives us this opportunity.

I have received a lot of feedback after my post “Has anyone ever thought of a new type of payment system?”. Thanks to all of those who tried to analyse and set out their vision. Special thanks to those who doubted my competence and brought out their own understanding of the processes and entered into a dispute.

How Does Coronavirus Affect the Price of Bitcoin? #exchange #p2p #bitcoin However, the year 2020 has presented an excellent opportunity for crypto... Dmitri Dervoed

Trading Bitcoins for Beginners. Part 2 #exchange #p2p Trading Bitcoin has developed like any other trading market. There are d... Dmitri Dervoed